Blackjack alternatively known as “Twenty-One”, is thought to be the most extensively played casino game worldwide. Although Blackjack’s exact history is unknown, most agree that the game is probably of French origin, appearing sometime during the 18th century and likely stemming from the French games Vingt-et-Un (or “Twenty-One”), French Ferme and Baccarat Chemin de Fer. Another possible place of origin is Spain, whose inhabitants played a similar card game with the objective of totalling a score of 31 with a minimum of three playing cards.

The Basics of Blackjack

Blackjack today is played with 2 to 6 players and a standard 52 card deck, minus Jokers. Players are given an initial hand of two cards each and must add the total value of these cards. In Blackjack, kings, queens and jack cards have a value of 10, as does the 10 card, and all numbered cards have point values relative to their printed numbers. Aces have a value of either 1 or 11, depending on the player’s choice, and this choice may result in either a “soft” or “hard” hand; a soft hand occurs whenever an ace card can be added to a player’s total using a value of either 1 or 11 and not exceed 21 either way, and the latter occurs when the addition of an ace card will not exceed a value of 21 if the value of the ace card is taken as 1, but will cause a “bust”, or immediate loss of the game, when taken as 11.

Players compete only with the dealer, and the objective of each player is to get a score of 21, but not more, before the dealer does. Each player places their bet in chips, after which the dealer deals each player two cards, facing up, and himself one card facing up and another, named the “hole card”, facing down. The dealer will then move around the table in a clockwise direction, starting on his immediate left, and give each player two options: to “stand”, not to take another card, or “hit”, to take an additional card. If a player takes a card that increases their total to over 21, the house wins their bet. The dealer will then reveal his hole card. If his hand amounts to 17 or more, he is required to stand; if it amounts to 16 or less, he must draw cards until the point value of his cards is 17 or more. 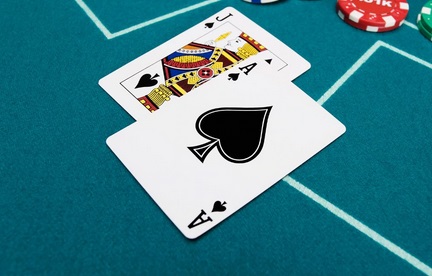 How to Win in Blackjack

A “natural” hand is the term used when the value of a player’s first two cards, the original hand, amounts to 21. This natural hand, or blackjack, automatically wins the round, and if the player has a natural and the dealer does not, the player in question will win one and a half times his initial wager. However, if the dealer flips over his hole card to reveal a natural hand, he collects the wagers of every player who does not have a natural. If a player and the dealer both draw naturals, a “stand-off” is called, and the player will win back his original bet.

Another means by which a player may win a game of Blackjack is by achieving a total score that is higher than that of the dealer, without their points exceeding 21. Also, if the dealer draws additional cards until the sum of his hand is larger than 21, this results in a bust and an automatic win for any player whose hand value has not yet exceeded 21.

There are not many people in the world that have no heard about the Transformers franchise at least once in their life. Starting in the 80s as a series of toys and a television animation, Transformers revolves around alien robots that can turn into various vehicles. The franchise became an instant hit, and more than […]

An Overview of Casino Euro, Betsson

An Introduction to Euro Casino Casino Euro was established in 2002 and is run by the BML Group Ltd which is a subsidiary company of Betsson AB. The company dates back to 1963 and is a Swedish based company that supplies online casino products like casinos; bingo; poker and so on. Casino Euro is only […]

Focusing on the Game of Blackjack for Casino Players

Blackjack is one of the most popular casino games worldwide and its well-loved by players who want to implement strategies and outwit the dealer. Although blackjack is an easy game to learn it’s one that can take plenty of practise to master, as players can use skill to influence the outcome.