For those of you who are reading this article because you’ve never heard the term “riverboat casino” until now, allow us to offer an explanation:

A riverboat casino is a type of gaming venue that is based aboard a riverboat instead of inside the traditional brick-and-mortar venues to which most of us are accustomed. Aside from their locations, riverboat casinos are exactly the same as their ordinary land-based counterparts. They feature slots, table games and other games of chance on which players can wager for the chance to win cash and other prizes.

The Origins of the Riverboat Casino

Although riverboats have been used all over the world, their most famous home undoubtedly lies in the midwestern and central southern regions of the United States, in which can be found the Mississippi, Ohio and Missouri Rivers.

Whilst, riverboats were already in use in the early 1800s, the riverboat casino only emerged a century later, once the railroad system had rendered them all but obsolete as cargo vessels. The birth of the riverboat casino was a significant event in the history of American gaming as it enabled the practice to take place in states where it was illegal on land.

At the time, gambling was permitted aboard riverboat casino venues, as long as they were capable of actually sailing and most states required each riverboat casino to leave the dock a certain number of times each year.

By the end of the Twentieth Century, however, many states had voted to allow riverboat casino activity, even when the vessels were docked. As a result, there is now many a riverboat casino on the Mississippi Delta and elsewhere that hasn’t sailed in decades.

Moreover, after Hurricane Katrina destroyed most of the Gulf Coast riverboat casino ships in 2005, a number of US states altered their legislation to allow these venues to set up shot on land, as long as it was within a set distance from a navigable waterway.

Resorts Casino Tunica, for example is a riverboat casino in Mississippi that is actually built on land. 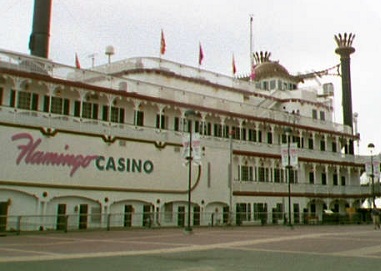 The Death of the Riverboat Casino?

However, despite legislation becoming even more favourable for riverboat casino owners, the global economic recession hit hard at the entertainment industry – and casinos, in particular – as people simply could no longer afford to spend money on leisure activities.

Moreover, even the improved legislation could not resurrect those casinos worst affected by the havoc that Katrina left in her wake. Here are just some of the riverboat casino venues that eventually went under:

Fortunately, the majority of riverboat casino destinations survived Katrina and, after a time, returned to sail again. Here are some of the riverboat casinos that are still open for business:

Atlantic City Blackjack is a unique blackjack variation developed in the 70’s by Atlantic City. At the time Las Vegas was the gaming Mecca in America so Atlantic City decided to create a unique Black Jack variant that lowers the house edge while providing insurance that assures players can of their own volition withdraw from […]

Online casino gaming has become one of the most popular ways to play real money casino games. Before the mid 1990’s, casino players had to travel to their nearest land-based casino in order to play slots, table games or lotteries, but all that changed with the advent of the world wide web.

Going Deeper into the Details about Redslots Online Casino

Redslots Casino first opened its virtual doors in 2012 thanks to Redcorp SA Casinos. Redcorp own a number of other online casinos such as 7Red and the 777Afiliates group of casinos. Redslots Casino is licensed in Curacao and makes use of software provided by super developer Betsoft. The casino does have a number of restrictions, […]